You can find the Galaxy Hotel in historical and beautiful Pylos , in the centre of west Messinia.

It is a cosy and hospitable hotel in the centre of the town from where you can go to beautiful places in the nearby area. The fully equipped rooms. offer all the comforts to our guests. Their furniture and decoration are according to the fine taste that is all over this mythical town.

You can have your breakfast or your coffee in the breakfast room of our hotel or in the central square, in front of the hotel, under huge plane trees.

The view of the wonderful Navarino bay from the balconies of our hotel as well as the high standard services offered by our personnel will make your stay unforgettable whether you are on holiday or business.

There are 34 rooms in our hotel, single, double and three bed rooms. Most of them have balconies with view to the central square - Trion Navarchon- as well as to the unique gulf of Navarino. All the rooms, besides the comfortable beds are air conditioning , bathrooms, televisions, and free wi-fi. 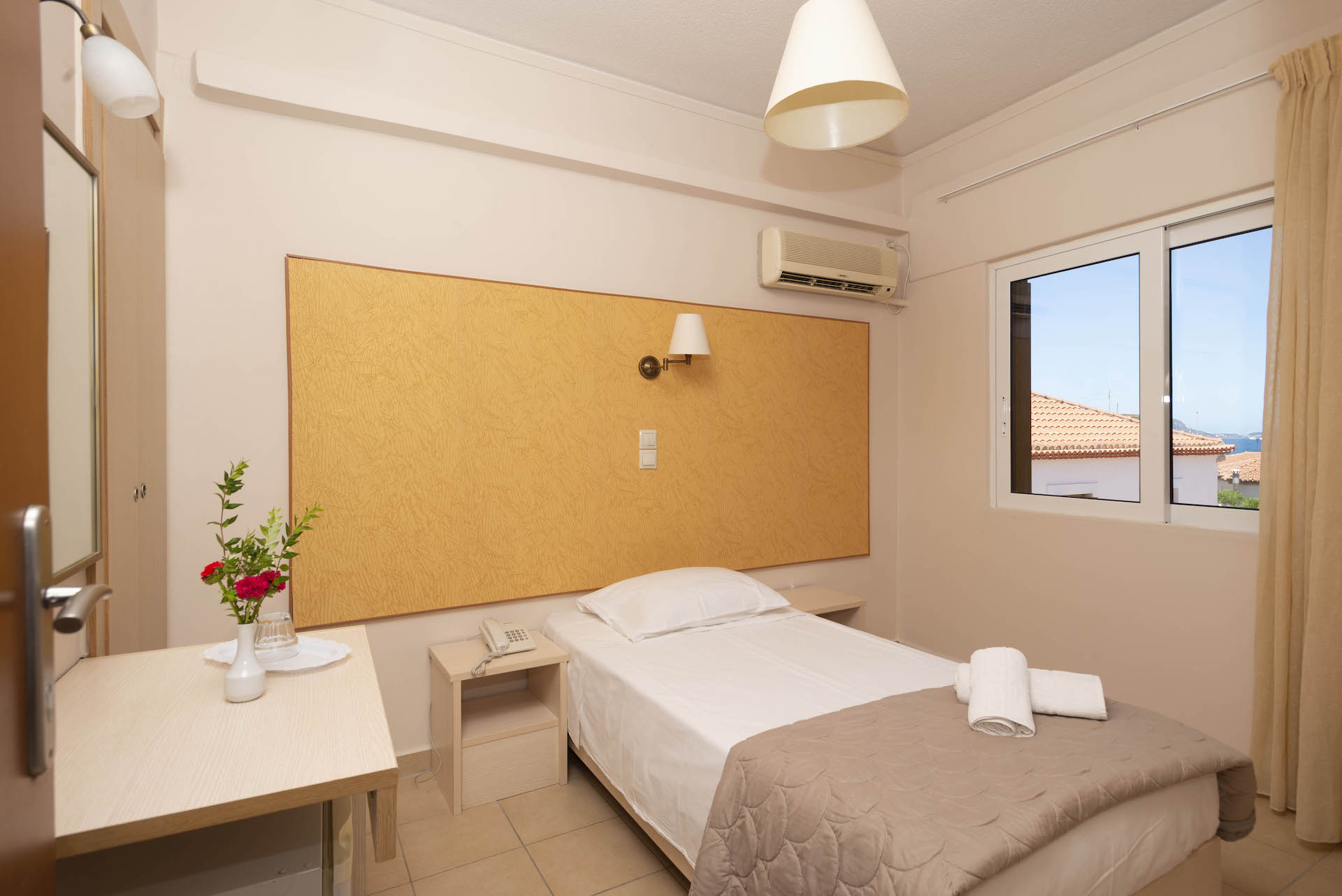 Pylos is a town of beauty. It's name is connected with the most significant events of the recent history of our country. According to the legend the founder of Pylos was Nileas, who after an Oracle came here in 1400 BC and built the town. He had 12 sons and two daughters. It is said that he was Poseidon 's - the God of sea - son. One of his sons was the wise king Nesror. Homer called Pylos the city of Nileas. Pylos has an intense island colour. In the central square of Pylos there is the monument of the three foreign admirals: The English admiral sir Edward Codrington, the French admiral de Rigny and the Russian admiral Heiden. They destroyed the Turkish fleet in the gulf of Navarino on September 20 1827. In that way they made " The Great Powers' acknowledge the right of the Greeks to fight for their freedom. In front of the monument you can see two canons ,remnants from that great battle. In that square you can enjoy your coffee or ouzo in the shade of towering plane trees. Near the square you can see Kostis Tsiclitiras' house ,a gold medal champion. On the left side of the entrance to the gulf of Pylos there is beautiful castle - Niocastro - which was built by the Turks to fortify the city. It has been restored and it's one of the best preserved castles in Greece. In its enclosure you will see an old church dedicated to the Transfiguration of Jesus Christ. At the seashore of Pylos there are the headquarters of an Institute called the institute of Nestor. The sea here has many sectors and it is of an immeasurable depth. A complicated telescope has been placed in the bottom of the deepest point of the Mediterranean Sea . It counts the neutrons, unique particles with zero mass, which were created 15 billion years ago . It is worth visiting Sfactiria ,a small uninhabited island which is at the entrance of the port. The waters of the beaches of Pylos are very clean but you can also go to other beaches few kilometres away, like the Romanos beach or the Divari beach where there is a unique aquatic place where you can see rare birds as well as the African Chameleon. Voidokilia 10 kilometres away is one of the most beautiful beaches in the world. It reminds of a lake with its blue-green waters and sand hills. There you can see the old castle - Paleocastro- and Roman remains from the first Christian years and the Hellenic period. There are also the ruins of a tomb which according to the legend belonged to Thrasimidis,one of Nestor's son. Your visit to Pylos, the picturesque town, will be unforgettable.